I read some of the top eco news today n stumbled upon an article titled "IPCC rainforest eco-trastophe claim confirmed bunk" in the Tehran Times. 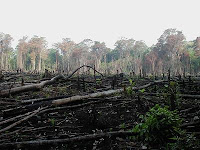 It says that the UN body came under attack for suggesting that 40% of the Amazonian rainforests (dubbed the "lungs of the planet" by some for their ability to turn CO2 into oxygen, and also seen as vital for their bio-diversity grounds) might disappear imminently. This disaster would be triggered, according to the IPCC's assessment, by a relatively slight drop in rainfall of the sort to be expected in a warming world. Scientists have made their research and now it appears that such conditions have already occurred, and the Amazonian jungles were unaffected. How long do they think the rainforest will survive when there's a constant decrease in supply of water? Do they think the rainforest will last forever? Even our regular home plants need a certain amount of water to survive.

Ok, so what if the Amazon can survive with a decrease amount of water. Good for them right. But what about the animals that depend on the water to survive? Are we suppose to just let them dehydrate and die? They are already fighting for space because of deforestation, thanks to us greedy humans who can never be satisfied, and now they have to fight for an important element which is necessary for any living organism to survive, water. The rich nations aren't the ones who will be affected by it first-hand, but the poor nations will be affected first. It's just sad that there are people out there who wants to prove those that are trying to do good for Mother Earth wrong. And why? Because of greed and money? Are these scientists implying that it is alright for the world to live with less water, a hotter climate (which they said is already happening now) and a more polluted world? That's the message I got from reading the article.

Tip of the day: Please buy only recycled paper and be proactive in recycling. It truly does help.
Posted by Green Cleaners Singapore and Australia