From 1 January 2013, the Ministry of Manpower has introduced new rules and guidance regarding Foreign Domestic Workers (FDW's). With a priority on ensuring FDW's are given a weekly rest day to allow for a proper emotional and physical break from work.

The guidelines also cover detailed information on illegal maids moonlighting by doing additional jobs such as cleaning homes and penalties that will be enforced on employers and maids who infringe these regulations, such as:

- FDWs who moonlight on their rest days are committing an offence and can be fined up to $20,000 and/or jailed up to 2 years. They may also be barred from employment in Singapore.

- Employers will be committing an offence if they use the services of FDWs who have not been approved to work for them. These employers can be fined up to $30,000 or jailed up to 1 year or both.

- You should not allow your FDW to moonlight or facilitate your FDW’s illegal employment. Employers who are caught doing so can be fined up to $10,000 or jailed up to 1 year, or both.

Know the rules and don't risk a fine - Hire a trusted, professional, legal and quality service provider, like Green Cleaners!

Get a quote today! http://greencleaners.asia/residential_quote.asp 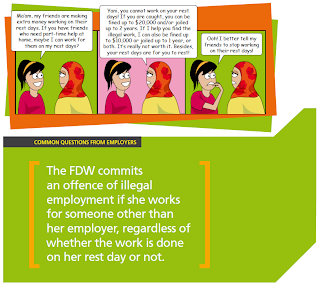 Eco-Friendly Laundry for the Eco Conscious You!

Hi, everyone! Here are some simple tips that will reduce the impact all those loads have on the environment. Take note and challenge yourself to try at least one from the list! 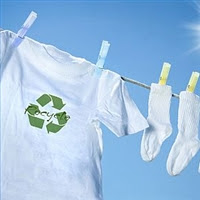 About 90 percent of the energy associated with doing laundry involves just heating up the water. The solution: Turn that dial to cold! You'll be surprised how much of a difference this makes to the environment.

Even the most energy-efficient loads use 40 gallons of water. Reducing the number of loads you do each week will save water and money. If you find yourself doing eight or more loads of laundry each week, skipping just one will save over 10 percent on your laundry costs.

This is not permission to go out and replace your current machine that’s running just fine. (But nice try!) If you’re in the market for a new washer or dryer, buying an energy efficient model can save both water and energy, and lower your bills.

Natural products tend to be free of chlorine bleach, synthetic fragrance, dyes, and optical brighteners. What's in them? They’re usually plant (not petroleum) based, contain biodegradable surfactants, and are often specifically formulated to perform well in cold water. Be sure to read the fine print when shopping; remember that knowledge is power.

Keeping your clothes out of a dryer extends their life, reduces energy use, and cuts costs. Whether indoors or outside, line drying can be done year round. Just don’t put dark colours in bright sunlight or they’ll fade. Bonus: For those who live in countries that have seasons, indoor rack drying during the winter doubles as a humidifier.

Make Your Own Laundry Products.

The only real way to know what’s going into your laundry is to whip up your own solutions. Use safe-for-the-environment ingredients that are already in your pantry like vinegar, lemon juice, hydrogen peroxide, and baking soda. Many of these DIY formulas have been used for generations and get the job done.

We hope this somehow continues to inspire you to green your lifestyle!
Posted by Green Cleaners Singapore and Australia 3 comments: 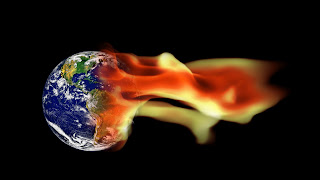 You've probably heard about the global warming song and dance: rising temperatures, melting ice caps and rising sea levels in the near future. But Earth's changing climate is already wreaking havoc in some very weird ways. So gird yourself for such strange effects as savage wildfires, 25-mile long icebergs, disappearing lakes, freak allergies, and the threat of long-gone diseases re-emerging.

While it's melting glaciers and creating more intense hurricanes, global warming also seems to be heating up forest fires in the United States. In western states over the past few decades, more wildfires have blazed across the countryside, burning more area for longer periods of time. Scientists have correlated the rampant blazes with warmer temperatures and earlier snowmelt. When spring arrives early and triggers an earlier snowmelt, forest areas become drier and stay so for longer, increasing the chance that they might ignite.

All over the globe, temples, ancient settlements and other artifacts stand as monuments to civilizations past, which until now have withstood the tests of time. But the immediate effects of global warming may finally do them in. Rising seas and more extreme weather have the potential to damage irreplaceable sites. Floods attributed to global warming have already damaged a 600-year-old site, Sukhothai, which was once the capital of a Thai kingdom.

Though the average hiker wouldn't notice, the Alps and other mountain ranges have experienced a gradual growth spurt over the past century or so thanks to the melting of the glaciers atop them. For thousands of years, the weight of these glaciers has pushed against the Earth's surface, causing it to depress. As the glaciers melt, this weight is lifting, and the surface slowly is springing back. Because global warming speeds up the melting of these glaciers, the mountains are rebounding faster.

A primary cause of a warmer planet's carbon dioxide emissions is having effects that reach into space with a bizarre twist. Air in the atmosphere's outermost layer is very thin, but air molecules still create drag that slows down satellites, requiring engineers to periodically boost them back into their proper orbits. But the amount of carbon dioxide up there is increasing. And while carbon dioxide molecules in the lower atmosphere release energy as heat when they collide, thereby warming the air, the sparser molecules in the upper atmosphere collide less frequently and tend to radiate their energy away, cooling the air around them. With more carbon dioxide up there, more cooling occurs, causing the air to settle. So the atmosphere is less dense and creates less drag.

Survival of the Fittest

As global warming brings an earlier start to spring, the early bird might not just get the worm. It might also get its genes passed on to the next generation. Because plants bloom earlier in the year, animals that wait until their usual time to migrate might miss out on all the food. Those who can reset their internal clocks and set out earlier stand a better chance at having offspring that survive and thus pass on their genetic information, thereby ultimately changing the genetic profile of their entire population.

Not only is the planet's rising temperature melting massive glaciers, but it also seems to be thawing out the layer of permanently frozen soil below the ground's surface. This thawing causes the ground to shrink and occurs unevenly, so it could lead to sinkholes and damage to structures such as railroad tracks, highways and houses. The destabilizing effects of melting permafrost at high altitudes, for example on mountains, could even cause rockslides and mudslides. Recent discoveries reveal the possibility of long-dormant diseases like smallpox could re-emerge as the ancient dead, their corpses thawing along with the tundra, get discovered by modern man.

A whopping 125 lakes in the Arctic have disappeared in the past few decades, backing up the idea that global warming is working fiendishly fast nearest Earth's poles. Research into the whereabouts of the missing water points to the probability that permafrost underneath the lakes thawed out. When this normally permanently-frozen ground thaws, the water in the lakes can seep through the soil, draining the lake, one researcher likened it to pulling the plug out of the bathtub. When the lakes disappear, the ecosystems they support also lose their home.

While melting ice in the Arctic might cause problems for plants and animals at lower latitudes, it's creating a downright sunny situation for Arctic biota. Arctic plants usually remain trapped in ice for most of the year. Nowadays, when the ice melts earlier in the spring, the plants seem to be eager to start growing. Research has found higher levels a certain type of the pigment chlorophyll (telltale sign of photosynthesis) in modern soils than in ancient soils, showing a biological boom in the Arctic in recent decades.

Heading for the Hills

Starting in the early 1900s, we've all had to look to slightly higher ground to spot our favorite chipmunks, mice and squirrels. Researchers have found that many of these animals have moved to greater elevations, possibly due to changes in their habitat caused by global warming. Similar changes to habitats are also threatening Arctic species like polar bears, as the sea ice they dwell on gradually melts away.

Have those sneeze attacks and itchy eyes that plague you every spring worsened in recent years? If so, global warming may be partly to blame. Over the past few decades, more and more Americans have started suffering from seasonal allergies and asthma. Though lifestyle changes and pollution ultimately leave people more vulnerable to the airborne allergens they breathe in, research has shown that the higher carbon dioxide levels and warmer temperatures associated with global warming are also playing a role by prodding plants to bloom earlier and produce more pollen. With more allergens produced earlier, allergy season can last longer. Get those tissues ready.
Posted by Green Cleaners Singapore and Australia No comments: