Crowded Earth: how many is too many?

Already straining to host seven billion souls, Earth is set to teem with billions more, and only a revolution in the use of resources can avert an environmental crunch, experts say.

As early as 1798, Thomas Malthus gloomily forecast that our ability to reproduce would quickly outstrip our ability to produce food, leading to mass starvation and a culling of the species.

But an industrial revolution and its impact on agriculture proved Malthus and later doomsayers wrong, even as our numbers doubled and redoubled with accelerating frequency.

"Despite alarmist predictions, historical increases in population have not been economically catastrophic," notes David Bloom, a professor in the Department of Global Health and Population at Harvard.

Today, though, it seems reasonable to ask if Malthus wasn't simply a couple of centuries ahead of the curve.

On October 31, the world's population is officially scheduled to hit seven billion -- a rise of two billion in less than a quarter century.

Over six decades, the global fertility rate has roughly halved, and amounts to a statistical 2.5 children per woman today.

But this varies greatly from country to country. And whether the planet's population eventually stabilises at nine, 10 or 15 billion depends on what happens in developing countries, mostly in Africa, with the fastest growth. 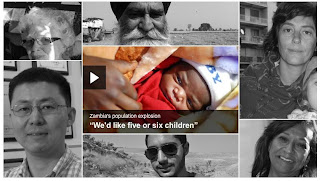 As our species has expanded, so has its devouring of the planet's bounty, from fresh water and soil richness to forests and fisheries.

At its current pace, humankind will need, by 2030, a second planet to satisfy its appetites and absorb its waste, the Global Footprint Network (GFN) calculated last month.

And through the coal, oil and gas that drive prosperity, we are also emitting greenhouse gases that alter the climate, potentially maiming the ecosystems which feed us.

"From soaring food prices to the crippling effects of climate change, our economies are now confronting the reality of years of spending beyond our means," GFN's president, Mathis Wackernagel, said.

French diplomat Brice Lalonde, one of two coordinators for next June's UN Conference on Sustainable Development, dubbed "Rio+20," said Earth's population rise poses a fundamental challenge to how we use resources.

"In 2030 there will be at least another billion people on the planet," Lalonde said.

"The question is, how do we boost food security and provide essential services to the billion poorest people but without using more water, land or energy?"

This is why, he said, Rio+20 will focus on practical things such as increasing cleaner sources in the world energy mix, smarter use of fresh water, building cities that are environmentally friendlier and raising farm yields without dousing the soil with chemicals.

But such options dwell far more on the impact of population growth than on the problem itself.

For some experts, voluntary birth control is the key.

Geoff Dabelko, director of the Environmental Change and Security Programme at the Woodrow Wilson Center in Washington, cites Somalia as a case study of what happens when women have no access to contraception.

Racked by civil war and poverty, its population is projected to grow from about 10 million today to 22.6 million by 2050. It has the eighth-highest birth rate in the world and an average of seven children per family.

Even before the country fell into a full-fledged crisis, a third of its children were severely underweight, according to UNICEF. Ninety-nine percent of married Somali women have no access to family planning.

Many economists, though, argue that the answer lies more in reducing poverty and boosting education, especially of women.

A 2010 study in Colombia found family planning explained less than 10 percent of the country's fertility fall. The real driver was improved standards of living.

Even so, at summits that seek to shape Earth's future, tackling population growth head-on is almost taboo.

"When I attended the UN environment conference in Stockholm (in 1972), the No. 1 item on the agenda was out-of-control population growth," recalled Paul Watson, head of Sea Shepherd Conservation Society, a radical green group.

"When I attended the 1992 conference (in Rio), it wasn't even on the agenda. No one talked about it any more."

Demography was similarly absent from the UN's 2002 Johannesburg Summit, when Earth's population had climbed to six billion.

Why does "how many is too much" remain absent from the top tables?

One perceived reason is the opposition by religious conservatives to contraception or abortion. Politicians, too, may see no mileage in addressing an issue that will only cause them headaches and yield benefits several decades away.

But for some critics, population measures are synonymous with the mistakes of coercive sterilisation in India in the 1970s or China's "one child" policy, which has led to a gender imbalance in favour of boys.
Posted by Green Cleaners Singapore and Australia No comments:

Top 3 most polluted countries in the world

Emerging nations around the world are often heralded for their fast growth but we don't often hear about the downsides of that rapid development.

The World Health Organization (WHO) recently released a report on air quality in countries around the globe, on which we based a list of the ten most polluted countries. Almost all the worst offenders are either major oil and gas producers, or emerging economies that are growing rapidly.

The WHO study looked at air quality in 91 countries, measured by the amount of PM10 particles per cubic meter. PM10 particles are particles of 10 micrometers or less that can cause diseases and infections. According to the WHO, PM10 levels above 20 micrograms per cubic meter can cause health risks. The top ten most polluted countries have PM10 levels from six times to14 times that level.

So, which countries have the world's worst air quality?

Pakistan's air pollution is nearly ten times higher than levels considered dangerous by the WHO.

Political instability, corruption and a lack of government measures to curb carbon emissions have led to a cloak of thick smoke over major cities like Karachi, Lahore and Islamabad. In 2008, a government study revealed that every car in Pakistan, regardless of its age, generates 25 percent more carbon than one in the U.S.

Karachi, Pakistan's biggest city has a capacity for only 700 vehicles per hour, but according to the study, there are more than 11,000 vehicles per hour on the roads. The city, which already has more than half the country's 3.5 million vehicles, adds up to 400 new cars a day.

Water pollution from raw sewage and industrial waste has also become a major problem in the country. In addition, Pakistan's water supply is evaporating so quickly that it will become a "water-famine" country by the end of this decade, according to the country's Centre for Research and Security Studies.

It might seem strange that a country with a population of only 2 million people, and the largest proportion of land under conservation in the world, is the second most polluted nation in the world. But, that is the case of Botswana, 80 percent of which is covered by the Kalahari Desert.

The country was one of the poorest nations in Africa at the time of its independence from Britain in 1966. Today, Botswana is one of the world's fastest growing economies, and the largest producer of diamonds. The country has transformed itself into a middle-income economy with an annual average growth rate of about 9 percent, according to The World Bank. Mineral revenues account for about 40 percent of government revenues.

With growing wealth, the southern African nation has experienced widespread environmental damage. Wild fires and pollution from the mineral industry are the main sources of the country's poor air quality. Copper smelting for example has been blamed for sulfur dioxide and nickel emissions.

The city of 1.2 million accounts for about 45 percent of Mongolia's population. During the coldest months of the year -- December to February -- Ulaanbaatar's horizon is completely hidden behind a thick grey-brown smoky haze.

The country's main sources of pollution are its traditional coal-fuelled stoves and boilers used for heating and cooking, as well as congested traffic and old cars. Heating is essential for the survival of its people for about eight months of year. The country uses everything from coal, wood to refuse, such as black tar-dipped bricks and old car tires to fuel stoves and boilers. Ulaanbaatar's dry climate and severe windstorms further worsen its dangerous levels of airborne dust.

Rapid urbanization has also been a major factor behind the country's pollution problem. Ulaanbaatar's population has expanded by 70 percent over the last 20 years with the city's infrastructure unable to keep up with growth. With an air pollution level 14-times higher than the WHO's standard threat level, the number of premature deaths, chronic bronchitis and respiratory related hospital admissions are on a rapid rise. The government has been trying to mitigate the problems by introducing measures such as cleaner coal-based fuel and modern stoves to address its pollution crisis.