It is 11am in Dubai and already 42 degrees Celsius outside. Inside the warehouse it is barely any cooler.

Although workplaces in the United Arab Emirates are normally fitted with air conditioning, here they have purposefully restricted it to the offices. "It's the chemical reactions," Karl Feilder, chairman of Neutral Fuels explains.

"They happen at 65 degrees so by keeping the factory temperature higher we expend less energy on the process. That makes it more efficient. That's better for the environment and it cuts costs."

He is pointing at the thirty metre long collection of industrial tanks and pipes through which the firm's main product is being made. The room smells a bit like a chip shop. There is a reason for that.

These tanks are used to produced biodiesel that can be used by any normal diesel engine They are making biodiesel - converting vegetable oil from local McDonald's restaurants so that it can be used to fuel trucks.

The biodiesel they produce can be used by any normal diesel engine. That makes it distinct from less processed vegetable and waste oils, which can only be used by converted engines.

Because the palm oil they get from McDonald's is the waste from food preparation, when it is burned the carbon emissions are reduced by 60-80% versus traditional diesel fuel.

Any carbon dioxide released is recaptured by trees McDonald's says are grown sustainably on certified farms in the Far East, providing the next batch of palm oil for use by the fast-food chain.

The oil comes from fast food restaurants like McDonalds Similar biodiesel programs from re-used cooking oil are already in operation by McDonald's in Germany, the UK and also in areas of Brazil and the United States. In the UAE, though, the process works better.

"Biodiesel has an issue depending on what its made from that at low temperatures it will clog up, form a gel and eventually freeze," according to Robin Mills, a Dubai-based energy analyst.

"Of course, low temperatures aren't a problem in this part of the world so it has performance benefits."

But it is not all smooth sailing.

The United Arab Emirates, like most of its neighbours in the Gulf, subsidises and caps the price of fuel at the pump.

That should make it trickier for companies like Neutral Fuels to compete and make a profit.

"The great thing is McDonald's oil is so predictable in terms of high quality and quantity that it makes our job of making biodiesel easier. That helps make us a profitable business."

Still, McDonald's has changed its entire fleet of 22 trucks in the country to use the biofuel.

They pick up the leftover vegetable oil from restaurants when they drop off fresh supplies of food during the day in bright-red converted wheelie bins.

Later, they stop off at the Neutral Fuels, leaving behind the full bins and taking on empty ones. They also top up their tanks from the biodiesel pump by the parking bay. McDonalds used to sell their palm oil to a third party in India who recycled it.

After dropping off the old oil, the McDonalds trucks fill up with biodiesel "Now we sell our oil to Neutral Fuels at the same price we used to sell it for before and we buy the biodiesel from them at the market price of diesel in the UAE, says Rafic Fakih managing director of McDonalds UAE.

"So we are no worse off and gain from the environmental benefits."

Given that the United Arab Emirates is the world's eighth largest oil producer, it is perhaps a surprise that the biodiesel project is gaining traction. Other restaurant chains are already expressing an interest in the program.

In this instance, it is perhaps an even bigger surprise that the programme is also backed by Emiratis.

"Nowadays companies are becoming more environmentally conscious and they want to, as much as they can, be environmentally sustainable," says Abdulla Al Jallaf, managing director of Neutral Fuels.

"I think it is a very interesting proposal to make use of waste materials."

Currently, McDonald's is Neutral Fuels only client and they have restricted the project to the UAE. But there are hopes to expand across to the wider region.

With the process profitable for Neutral Fuels and likely to save McDonald's money in the longer run if diesel prices continue to rise, it seems likely its spread will be inevitable.

Good news for the environment, company profits and anyone interested in running their vehicle on the power of French Fries.
Posted by Green Cleaners Singapore and Australia No comments:

Ten Somali children under the age of five are dying every day of hunger-related causes in a refugee camp in Ethiopia, according to the UN refugee agency.

UNHCR reported the "alarming" increase in the number of deaths at Kobe camp after completing an assessment this week. The main cause was malnutrition, although a measles outbreak has contributed to the high mortality rate.

The camp, one of four in Dollo Adow in south-east Ethiopia, opened in June when Somalis fleeing drought and conflict poured over the border in large numbers. Kobe reached its 25,000 capacity in a month, and while new arrivals from Somalia are being directed elsewhere the death toll is not slowing.

In a briefing in Geneva, UNHCR said the average of ten deaths a day stretched back to late June, meaning that at least 500 young children had died in less than two months.

Most of the Somali refugees arriving in Ethiopia are from rural areas, and many have never used formal health facilities before. Ron Redmond, a UNHCR spokesman in Nairobi, said this was a factor in the high death rate because parents did not know what to do with their malnourished children, even after receiving initial treatment and handouts of therapeutic food.

"Parents are told they need to sustain the supplementary feeding but they don't always do it," said Redmond. "Ensuring that they treat their kids and bring them back to health centres in a large camp is difficult and labour intensive."

Separately, some 17,500 Somalis have crossed into the Gode and Afder areas of Ethiopia, 150 miles north-east of Dollo Adow, in the past six weeks.

The continued exodus and growing death toll from the famine in Somalia is raising fresh questions about the culpability of the al-Shabaab insurgent group, which controls most of the southern part of the country. Though the causes of the famine or near-famine conditions in southern Somalia are numerous – including drought, high food prices and the absence of a government for two decades – the al-Qaida-linked Islamist movement has played a significant role.

Initially known for its effective guerrilla campaign against occupying Ethiopian forces, al-Shabaab became increasingly extreme once the enemy withdrew, with militants enforcing mosque attendance and carrying out amputations and stonings of alleged criminals, some of them teenagers. By assassinating local journalists, they ensured that the motivations and makeup of their forces have remained murky.

In 2009, al-Shabaab banned a number of aid groups, including the UN World Food Programme, for alleged offences ranging from spying to being anti-Muslim and distorting the local economy. Numerous humanitarian workers were also killed, ensuring that even groups with permission to work had to scale back their activities and withdraw non-Somali staff.

The restrictions and security concerns meant millions of Somalis had no safety net when the drought really began to bite early this year. In the worst-hit areas, there was no food distribution or help in obtaining water.

In early July the rebels said all aid agencies would be allowed to assist with drought relief, but then backtracked, saying the earlier ban on certain organisations stood. They also denied that famine was occurring.

Interviews with refugees who fled Somalia for Kenya revealed that in some areas al-Shabaab militias had tried to prevent people from leaving to seek outside help, even those pushed close to death by hunger. A new report by Human Rights Watch confirmed these findings.

Despite withdrawing the bulk of their forces from Mogadishu earlier this month in a "tactical" move, al-Shabaab still controls most of southern Somalia. While more aid is getting into the country, some of the worst-affected areas are still without assistance.
Posted by Green Cleaners Singapore and Australia No comments:

The Grace Hotel is the proud recipient of the 10 Year Sustainability Achievement Award at the 2011 Green Globe Awards.

The award was presented to the hotel’s General Manager Mr. Philip Pratley by the Hon. Robyn Parker, MP Minister for the Environment at Parliament House on 26th July 2011.

The Award recognises the hotel’s continued commitment to sustainability and protecting the environment since the inaugural Green Globe Award in 2001. Over the past 10 years, The Grace Hotel’s management and staff have continuously implemented environmental initiatives particularly in the areas of pollution reduction and resource conservation. Some of the hotel’s initiatives include:

• Despite additional food and recreational outlets, water consumption has also decreased due to water efficiency programs and increased monitoring.

• Green amenities with biodegradable packaging are now in all guest’s rooms. Environmentally friendly cleaning products are also used in housekeeping.

• To reduce the impact on landfill, the hotel has introduced a new garbage system with more efficiency in sorting garbage.

As part of the hotel’s commitment to help protect and sustain the environment for future generations, they will continue to support environmental initiatives and seek environmentally-friendly products, services and partners who share in the vision of environmental sustainability.

That sounds good policy to us at GC - well done Grace Hotel!
Posted by Green Cleaners Singapore and Australia No comments: 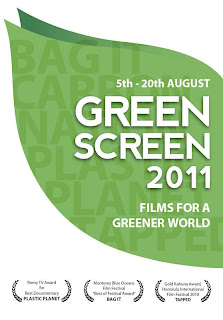