Why is it so hard for people to accept that we humans are to be blamed for the mess we've caused? Isn't it typical of us human to not accept blame or push it to someone else?

So there's a new article that came out today stating that human impact on the climate change is more clearer. The Met, Britain's national weather service, says a new review of 110 research papers written and researched during the last 3 years shows "evidence has strengthened for human influence on climate" according to a BBC news report. 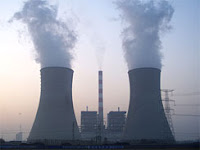 What makes the new review by the Met more credible, according to its authors, is the broad view it takes of the world's weather and it's eco-systems. A separate research has shown that Methane is possibly a bigger threat to the Earth's delicate environment than previously thought. Methane, which is a potent global warming gas, is bubbling out of the Arctic ice faster than expected, thanks to a warming climate. This was reported in Friday's edition of the journal Science. "The amount of methane coming out of the East Siberian Arctic Shelf is comparable to the amount coming out of the entire world's oceans" said Natalie Shakhova, of the University of Alaska Fairbanks International Arctic Research Center and co-author.

Concerns about global warming have centered on rising levels of carbon dioxide in the atmosphere, but scientists note that methane can be 30 times more effective at trapping heat than carbon dioxide. But this DOES NOT mean that we can use this to our advantage and continue our increase in carbon dioxide ok people! Maybe the skeptics should sit in a room full of smog and see whether they can last in there and come out feeling good..

Tip of the day: Instead of using a treadmill, go out and jog in the park. Rather than breathing in used and recycled air in the gym, enjoy the air, which is cleaned up naturally by the plants, in the park :) You'll save as well :)
Posted by Green Cleaners Singapore and Australia