Oil on the Po

The Po river, Italy's longest river and known as the lifeline of their agriculture, was deliberately polluted 2 days ago by what the president of the Monza province described as "eco-terrorrists". 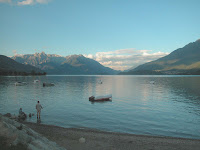 The oil-spill, several kilometres long, moved downstream with the Lambro river from Villasanta, crossed the town of Monza, passed by the Milan area and then flowed into the Po. That sounds like a very long way down. The spill involved at least 260,000 gallons of oil made up of diesel and home-heating oil, both known to be heavy and extremely sticky. Despite efforts to contain the slick with absorbent pads and the closure of the hydraulic locks, the oil seeped from the Lambro into the Po. Inhabitants in the region were advised not to drink tap water as it is contaminated.

I cannot imagine the amount of anger and sadness felt by the affected people. How selfish can a person be to cause an oil-spill on water, which is one of the most important source for human lives. We are already depleting our water and food resources and yet there are people out there who would destroy the necessities of life because of them being upset lil brats and wanting to get their message across!

What about the innocent animals or fish that depend on the river for their survival! And of cos the government himself seemed more concerned about how it would affect the country's GDP as it accounts for 40% of Italy's GDP. I would give the perpetrator a good spanking and make him have a taste of his own medicine if it was up to me. This news reallly p****d me off!

My heart goes out to those affected by the oil-spills and of course the lives lost in Chile....

Tips of the Day: Teach your kids young on the importance of recycling and not to be wasteful. Bring them along when you're throwing your recycling away so it'll make it a habit for them.
Posted by Green Cleaners Singapore and Australia