World Vegan Day is 1 November - This marks the start of World Vegan Month. Feel free to post us your events and how you are celebrating and we'll share with our community.

Veganism and the environment

Throughout the 20th century growing populations and ever-increasing industrialisation had devastating effects on our environment. Global warming, widespread pollution, deforestation, land degradation and species extinction are just some of the problems we now face. The full consequences of such large-scale environmental degradation are impossible to judge, but what we do know is that the impacts on humanity will be most devastating in the developing world. With hundreds of millions of people already not obtaining enough food to meet their basic needs and billions of people lacking access to safe water supplies, it is imperative that we find sustainable methods of food production that do not further degrade planetary health.

"Removing the causes of environmental degradation is often more effective than seeking to control the symptoms." - Cornelis de Haan, Livestock Adviser to the World Bank 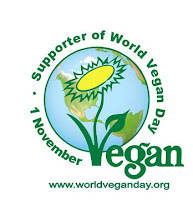 Agriculture in general is one of the most resource-intensive and environmentally damaging aspects of industrialised living. What this means for us as individuals is that if we are trying to reduce our car use, limit the amount of water we waste, become more 'energy-efficient' and generally lessen our environmental impact, then we should also examine our eating habits.

People are increasingly becoming aware of the direct correlation between what they eat every day and the health of the planet. Environmentally conscious consumers are concerned not only with food miles, over-packaging, pesticide use and GM foods, but also question the environmental sustainability of modern animal husbandry. Farmers used to be seen as 'custodian's of the countryside,' but the overriding image of modern industrial farming is one of destruction and waste.

World meat production has quadrupled in the past 50 years and livestock now outnumber people by more than 3 to 1. In other words, the livestock population is expanding at a faster rate than the human population. This trend contributes to all of the environmental problems already outlined.

A report commissioned by the United Nations Food and Agriculture Organisation (FAO), the US Agency for International Development (USAID) and the World Bank concluded that factory farming, "acts directly on land, water, air and biodiversity through the emission of animal waste, use of fossil fuels and substitution of animal genetic resources. In addition, it affects the global land base indirectly through its effect on the arable land needed to satisfy its feed concentrate requirements. Ammonia emissions from manure storage and application lead to localized acid rain and ailing forests."
Posted by Green Cleaners Singapore and Australia