Amazing images captured by satellites and astronauts on the space station 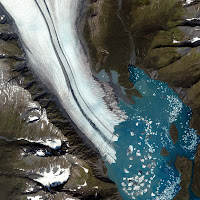 Glaciers are masses of ice which move over land, carving out the landscape. Because they are sensitive to any changes in climate, they are indicators of global warming. Here we look at images of glaciers captured by satellites and astronauts on the space station.

The Bear Glacier in the Kenai Peninsula along the Gulf of Alaska empties into a lake. Pieces of the glacier that have broken off look like shards of white glass in the blue water. Down the middle of the glacier run stripes caused by the dirt and debris the glacier has picked up as it moved 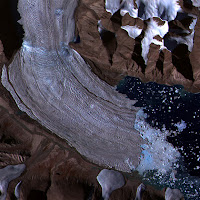 A detailed view of the leading edge of the Eugenie Glacier's "floating tongue" reveals surface cracks and extensive calving of icebergs in Dobbin Bay.

The Bering Glacier, about 10 km from the Gulf of Alaska, is the largest glacier in North America. Warmer temperatures and changes in precipitation over the past century have thinned it by several hundred metres. 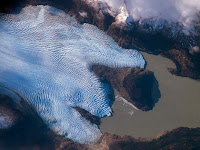 Glacial lakes in the Bhutan-Himalaya suggest that glaciers in the Himalaya are wasting at alarming and accelerating rates.
Posted by Green Cleaners Singapore and Australia