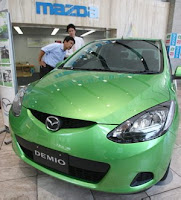 Mazda Motor plans to raise Y96bn ($1.1bn) in a share sale to fund development of hybrid vehicles, as it attempts to close a "green car" gap with competitors such as Toyota and Honda. The Japanese carmaker yesterday said it would offer 363m new shares to investors, equivalent to one-quarter of its outstanding stock, and sell an additional 97m existing shares that it bought about a year ago from Ford Motor, its long-time US partner.

Mazda is taking advantage of a rebound in equity prices that has convinced a number of groups to issue stock in recent months, including BNP Paribas, Nomura, UniCredit and HeidelbergCement. Mazda's shares have climbed by nearly 60 per cent from their lows in March, as investors bet the worst of the global recession - and its especially punishing impact on carmakers - has passed.

Mazda's fundraising also reflects growing pressure on small carmakers to join the market for petrolelectric hybrids and other advanced low-emission vehicles, which are expensive to develop and have been sold mostly by large companies such as Toyota.
Investment capital is seen as especially critical for Mazda, whose ties to the much larger Ford group have loosened. Ford sold a majority of its 33 per cent Mazda stake last November to cover deepening losses.

Mazda said it planned to spend Y60bn of the new cash on technological innovation. It plans to raise the average fuelefficiency of its fleet by 30 per cent by 2015 compared with 2008, by introducing next-generation drives and improving the performance of its petrol-burning internal-combustion engines. Mazda uses a hybrid system developed by Ford in the single hybrid model it presently offers, a version of its Tribute small sport-utility vehicle, which is itself based on the Ford Escape. Only a few hybrid Tributes have been sold.

The company said it planned to show a prototype hybrid passenger car at this month's Tokyo Motor show and would begin selling the car by 2011. The new vehicle may use hybrid components supplied by Toyota, which began talks on a procurement deal with Mazda this year, according to people familiar with the matter.

Mazda said preliminary results for its second quarter showed it had returned to profit at operating level - a quicker rebound than it had initially expected. Mazda narrowed its projected operating loss for the full year to Y13bn from Y50bn and raised its global sales outlook by 55,000 vehicles to 1.155m. Of the new shares, 315m are to be sold through a public offering and 48m shares may be issued to Nomura Securities, one of the deal's underwriters, depending on demand.
Posted by Green Cleaners Singapore and Australia