Denmark's prime minister says he does not think a legally binding deal on climate change will be agreed upon at a December summit in Copenhagen. 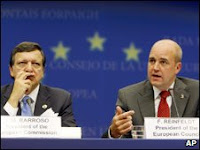 Lars Loekke Rasmussen spoke ahead of an EU summit at which climate change will be one of the main topics. EU leaders must also decide how to secure the Czech Republic's ratification of the Lisbon Treaty. The treaty would create a full-time EU president, and leaders are expected to discuss who could fill the role.

December's eagerly anticipated United Nations' Copenhagen Climate Summit will attempt to hammer out a new global climate treaty to replace the UN Kyoto Protocol. But Mr Rasmussen said he did not believe a final deal on reducing greenhouse emissions could be reached at the meeting. The main story will revolve around what can be gleaned about Tony Blair's chances to become the first President of the European Council. "We do not think it will be possible to decide all the finer details for a legally binding regime," he said.

However, UN Secretary General Ban Ki-moon said that even if no treaty is signed in Copenhagen, he was confident a political agreement could be reached there. "We are not lowering expectations," he said. "If we can agree on four political elements, then that could be a hallmark of success on climate change."

At the Brussels summit, European leaders will try to iron out their differences over how much each EU member should pay to help developing nations fight global warming. The European Commission has recommended EU nations pay up to 15bn euros ($22bn; £13bn) a year from 2013 to developing nations to help them cope with climate change. But aid and environmental groups have said Europe should be prepared to pay more than twice as much. Talks last week on how to fund such aid collapsed as EU finance ministers disagreed over how to share the costs.

On the eve of the summit, Swedish Prime Minister Fredrik Reinfeldt, whose country currently holds the rotating EU presidency, urged his counterparts to compromise on agreeing climate aid figures to developing nations. "We have a risk for a clear deadlock in the negotiations," he said. "The emerging economies are looking for financing and without it they will not make the required reduction targets."

It is unclear how much money the EU is willing to put on the table and who should pay what. 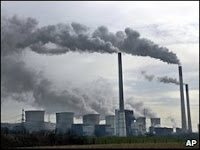 Poland and other Eastern and Central European countries say they are too poor to contribute much, our correspondent says. The EU is committed to cutting carbon dioxide (CO2) emissions by 20% by 2020 and by up to 30% if other countries join in.
Developing nations have been arguing that industrialised countries should carry most of the burden, because they are responsible for the majority of CO2 emissions.

The two-day Brussels meeting must also try to seal an agreement for the ratification of the Lisbon reform treaty with the Czech Republic. Czech President Vaclav Klaus is the only EU leader who has yet to sign the treaty, demanding an opt-out from the treaty's Charter of Fundamental Rights. The Eurosceptic Mr Klaus fears that charter could be used by ethnic Germans to reclaim land they lost in the Czech Republic after World War II. The Czech Constitutional Court is expected to rule next week on whether the treaty complies with the country's constitution, clearing the way for Mr Klaus' decision.

EU leaders are also expected to discuss who will fill the post of full-time president that the Lisbon Treaty would create. Former British Prime Minister Tony Blair and Luxembourg Premier Jean-Claude Juncker have been touted as the leading candidates for the job.
Posted by Green Cleaners Singapore and Australia