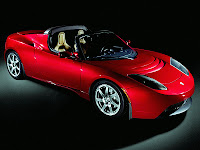 Gasoline "should probably be $10" per gallon, said onetime PayPal co-founder Musk, who is also attempting to make sending satellites into space cheaper with a start-up called SpaceX. "I'm not paying for the true cost of gasoline at the pump...since nobody's explicitly paying for the CO2 capacity of the oceans and atmospheres, it's getting consumed. We will pay for it down the road, but we are sort of ignoring it for now."

Musk's company has put out the Tesla Roadster, a pricey sports car that runs exclusively on electric power. On the way is the Model S, a more affordable sedan. Separate from the technology, Tesla has gained a reputation for financial difficulties and corporate bickering. Earlier this month, former CEO Martin Eberhard sued Musk and the company for libel and breach of contract.

Musk's rash attitude and devotion to cutting-edge innovation has constructed him as a figure less than willing to compromise. He didn't sound too satisfied, for example, with the level of innovation in the Toyota Prius, the car that is practically synonymous with environmental consciousness in the auto industry.

"A Prius is not a true hybrid, really," he said. (A plug-in Prius is on the way.) "The current Prius is like, 2 percent electric. It's a gasoline car with slightly better mileage."

That said, Tesla shines quite a bit brighter due to the utter disarray of the U.S. auto industry, with major automakers falling into bankruptcy and Detroit in a continuing downward spiral.

Surprisingly, Musk seems to believe that Detroit will survive. "I think it'll probably be a healthier place. This has been somewhat cathartic. Maybe, I think, maybe I'm being overly optimistic, but I think this will be a cathartic experience," Musk said. "I think GM and Ford, maybe not Chrysler, but GM and Ford will come out of this healthier...and more competitive."

He wants Tesla to be part of that, obviously.

"I'd like to take up some of the manufacturing plants," he said. "When the mess gets sorted out I'd like to have a conversation with whoever's in charge."
Posted by Green Cleaners Singapore and Australia