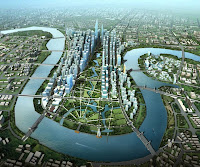 The Tianjin eco-city needs to offer 'special incentives' to continue its good progress in attracting foreign investments amid the global economic crisis, Minister for National Development Mah Bow Tan said on Wednesday.
The Sino-Singapore joint venture, which has already drawn significant projects in its initial phase, is applying for Beijing's approval to offer special terms to companies setting up shop in the eco-city.

This will help to offset 'the higher costs' of starting operations in an eco-friendly environment, Mr Mah told reporters after a meeting with the Singapore-Tianjin eco-city committee.

On top of this, the 50 billion yuan (S$10 billion) project is currently being built from scratch at Binhai New Area, 45km away from Tianjin's city centre.

But special incentives will help to offset such costs and concerns among investors, making the city competitive against other 'green' industrial parks in China and abroad vying for investors, he said.

Mr Mah did not specify what incentives he was referring to. But the usual incentives include tax breaks and subsidies on office rental.

The eco-city is looking to attract 10 billion yuan worth of investment this year, Mr Cui Guangzhi, vice-chairman of the eco-city administrative committee which plans and oversees the project, told state media Xinhua in March.

Mr Mah acknowledged that the economic crisis will have some impact on the eco-city and possibly even trigger 'some slowdown in investments'.

But the project has already 'made a lot of progress (in terms of) hardware' since its ground-breaking in September last year, he noted. It will now 'shift its focus to software development' like creating a place where people from all walks of life live in harmony with the environment.
Posted by Green Cleaners Singapore and Australia