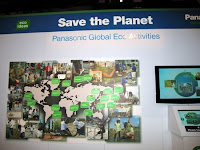 Last Friday saw a Japanese company (hopefully, not the last) articulate its green commitment to the Asia-Pacific region outside of Japan....
Panasonic's pledge will see it kicking off eco awareness programs, eco-friendly products and carbon emission initiatives in Asia Pacific, before it looks to the West. Why Asia Pacific? Simply because most of the company's factories are in this region, said Panasonic's pragmatic managing executive officer Ikuo Miyamoto who takes the JR train and bus to work as an example to his subordinates.

Even rarer yet, the media was given clear deadlines on when Panasonic's undertakings for the region will come to fruition. We were told that by 2010, all its manufacturing operations in Asia Pacific will cut CO2 emissions by 240,000 tons, or about a 30 percent drop from 2006 levels.

Eco ideas factories will each be set up in Singapore first, followed by Malaysia and Thailand. These will be model factories embodying the company's eco ideas strategy. And by 2012, 80 percent of its Asia-Pacific sales will come from environmentally friendly, energy- and water-efficient and long-lasting products. Among these will be inverter fridges now out in stores, tilted drum washers for reduced water usage and more energy-efficient fluorescent lamps. Too bad we didn't get to see or try out its lithium-ion-powered bicycle.

But when asked if Panasonic was working with Asia's Governments on green incentives similar to Japan and elsewhere in the world, Miyamoto was unable to comment. In Japan, to boost spending as part of its economic stimulus, the Government has an incentive program aimed at encouraging consumers to buy energy-efficient electronics and appliances.

One can only hope that with more green initiatives by companies like Panasonic, Governments in Asia will be prompted to think along similar lines not just for the economy, but for the consumer as well.
Posted by Green Cleaners Singapore and Australia