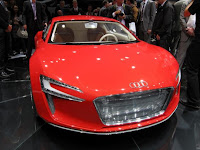 The most exciting concept shown at the 2009 Frankfurt auto show is an electric sports car, the Audi e-tron. Borrowing body lines from the Audi R8, it can't help but look good. And boasting specs like 3,319 pound-feet of torque, it can't help but make gearheads drool.

Audi achieves that torque number by using four electric motors, one at each wheel. The drooling gearheads should be able to close their mouths again after hearing that the combined horsepower is only 313, making for a zero to 62 mph time of 4.8 seconds. But electric car enthusiasts will be happy to hear that the e-tron's range is 154 miles.

The four electric motors meant that Audi could design a virtual Quattro all-wheel-drive system, integrating the power distribution program with vehicle dynamics sensors. By default, the rear motors deliver 70 percent of the torque, the high number compensating for the 58 percent weight distribution to the rear wheels. But as conditions dictate, the power software can give any wheel greater or less power, which should make for incredible road-holding, beyond even Audi's current Quattro system.

A two-seater, the cabin is relatively simple, featuring a minimum of controls and gauges. The car's navigation and communication electronics are designed to communicate with external roads infrastructure, receiving information about traffic and green lights, for example, and adjusting routes accordingly to maximize driving efficiency.

The Audi e-tron might sound like a serious competitor to the Tesla Roadster, but the Tesla has one huge advantage: it's already in production.
Posted by Green Cleaners Singapore and Australia