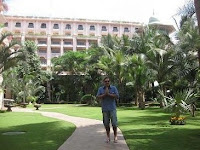 Located in the "Silicon Valley" of India, The Leela's flagship property is ISO14001 certified and set amidst nine acres of lush tropical gardens. For the last two decades, the visionary chairman of The Leela Palaces Hotels & Resorts, Capt. C. P. Krishnan Nair, has made it his personal passion to focus on beautifying the environment. His inspiration has made him a leading figure in the movement to conserve and protect the environment within the international hotel industry.

"This prestigious recognition from the government of my country is a
very special honor, which I will always cherish," Capt. Nair says. "When India recognizes my crusade to green mother earth, my wife Leela and I feel fulfilled, he says.

Capt. Nair was the first recipient of the Lifetime Achievement Award given by the American Academy of Hospitality Sciences for his contribution as a visionary environmentalist. The Emperor of Japan bestowed on him the world's highest award for his environmental initiatives, the Global 500 Roll of Honor Award from the United Nations Environment Programme (UNEP.)

Leading by example, the Leela Palaces, Hotels & Resorts has a corporate philosophy of responsibility towards the environment in its operation and new development. The group is committed toward the prevention of pollution and the use of environmentally-friendly technologies including: eco-friendly herbal pesticides, recycling old flowers and leaves for compost and watering the gardens using treated waste water.

Drawing inspiration from the architectural style of the Royal Palace of Mysore and the palaces of the Vijayanagara empire, the award-winning Leela Palace Kempinski Bangalore has 357 rooms and suites. The property boasts the largest rooms in the city, with the average room measuring 575 square feet and Royal Club Suites measuring over 1,000 square feet. The palace hotel has four restaurants, Asia's premier urban spa, a fitness center and a swimming pool. With a total 16,360 square feet of meeting space, The Leela is popular with the many IT, software, aerospace and telecommunications companies that are based in Bangalore.
Posted by Green Cleaners Singapore and Australia