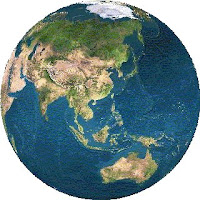 Here’s a selection of the countries in Asia and their responses:
Those Reporting Knowing “Something” or a “Green Deal” About Global Warming (How much do you know about global warming or climate change?)
Percentage reporting knowledge of global warming:
Japan - 99%
South Korea - 93%
Hong Kong - 93%
Taiwan - 91%
Thailand - 88%
Singapore - 84%
Laos - 80%
Mongolia - 75%
Vietnam - 73%
Sri Lanka - 73%
Malaysia - 71%
China - 62%
Cambodia - 58%
Philippines - 47%
Indonesia - 39%
Nepal - 37%
India - 35%
Pakistan - 34%
Bangladesh - 33%
Those Reporting That Global Warming Is a Result of Human Activities (Temperature rise is a part of global warming or climate change. Do you think rising temperatures are … a result of human activities?)
Percentage who say result of human activities:
South Korea - 92%
Japan - 91%
Taiwan - 81%
Hong Kong - 78%
Philippines - 72%
Thailand - 70%
Laos - 65%
Malaysia - 63%
Sri Lanka - 63%
Bangladesh - 62%
China - 58%
Indonesia - 55%
Mongolia - 54%
India - 53%
Vietnam - 49%
Nepal - 48%
Singapore - 44%
Cambodia - 34%
Pakistan - 25%
Japan and South Korea are tops in the above rankings, which is not suprising given the strong government leadership and public campaigns. Singapore ranks quite highly on the knowledge of global warming but is among the bottom countries in Asia that thinks that global warming is not a result of human activities. Well, that means more work is needed to educate the public in Singapore on global warming and climate change - the science, causes, impacts and solutions. Likewise for other Asian countries.
Posted by Green Cleaners Singapore and Australia