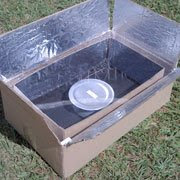 This is the £50,000 winner of a contest to find the world's greenest invention - a solar-powered oven made from cardboard. The cooker took the FT Climate Change Challenge crown after beating 300 other creations, including a food additive which stops cows passing wind.

The Kyoto Box oven - which costs just £3.50 to make - can cook casseroles, boil water and bake bread. It is made from two boxes, one inside the other with an acrylic cover, which lets the sun's power in and traps it.

Black paint on the inner box and silver foil on the outer help concentrate the heat while a layer of straw or newspaper between the two provides insulation.

It is the brainchild of Kenya-based entrepreneur Jon Bøhmer. Mr Bøhmer, a Norwegian, set up Kyoto Energy with his Kenyan wife Neema, and has used his own money to fund the project. The oven is targeted at the three billion people who use firewood to cook in developing countries.

Mr Bøhmer said: "We're saving lives and saving trees. I doubt if there is any other technology that can make so much impact for so little money."

He plans to use the prize to conduct mass trials in 10 countries, including South Africa, India and Indonesia and gather data to back an application for carbon credits. The box aims to save some of the millions of children who die each year from food cooked with unclean drinking water.

He believes it will also halve the need for firewood, saving an estimated two tonnes of carbon per family per year. He has now developed a more robust, longer-lasting cooker in corrugated plastic, which he says can be mass-produced as cheaply as the cardboard version.

Mootral, which is derived from garlic, cuts the methane produced by cows, sheep and other ruminants. Animal methane is estimated to be responsible for 20% of global warming.
Posted by Green Cleaners Singapore and Australia