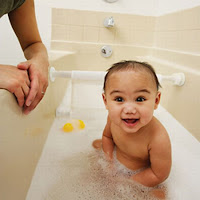 Popular children's bath products contain cancer-causing chemicals, according to research carried out in the United States.
An independent laboratory tested a range of top-selling brands and found many of them contained formaldehyde, which is used to embalm corpses. Out of the 28 products tested for formaldehyde in the study, 23 contained it. Studies have linked the substance to cancers of the brain, nasal sinuses and possibly leukaemia. Others had traces of 1,4-dioxane, a foaming agent which is also believed to be a cancer risk for humans. Of the 48 items tested for 1,4-dioxane, 67% contained it.
It is banned in Europe, and formaldehyde is restricted. However, the chemicals are apparently unregulated in the US. Both substances were apparently found in Johnson's Baby Shampoo,
L'Oreal Kids Extra Gentle 2-in-1 shampoo and Pampers Kandoo foaming soap. Stacy Malkan from the Campaign for Safe Cosmetics, who commissioned the tests, said: "If chemicals are causing cancer in animals, we really shouldn't be putting them on babies' heads."However the Personal Care Products Council accused the group of preying on parents' fears and described the results as "patently false".
Posted by Green Cleaners Singapore and Australia