So last night I went to Stereophonics concert, who decided to start one and a half hour later. Rockstars.

I guess age is catching up to me so I am getting abit more impatient. And plus their stage presence wasn't that great. I might as well pop in their dvd on a large screen and press play. So overall it was all just ok.

What disappointed me the most is that everyone is talking about recycling and going green but there was no recycling bin to be found at the concert venue, which was held at Fort Canning Park. 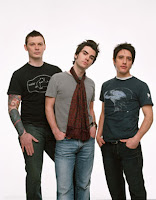 As the night progressed, more and more litter was collected on the grass instead of the bin. I only saw one bin on the left hand side of the park which was slowly being filled with mainly cans and plastic bottles. And guess what were the main leftover of these litter-friendly concert goers? Beer cans and plastic bottles, which could all be recycled. These events companies should provide a recycling bin at all events.

Placing it there is a huge statement on its own. It will make people think twice about just disposing recyclable materials in the regular bin or littering. But the saddest thing about whole thing is that these people are all of a matured crowd.... If we adults can't even be responsible enough to not litter, then what about the simplest act of recycling? When are we ever gonna grow up....
Posted by Green Cleaners Singapore and Australia