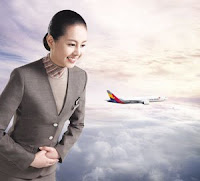 Asiana Airlines is not just flying high in the skies, but is also leading the way in environmental friendly efforts.

Aircrafts are a major source of global carbon dioxide (CO2) emissions, but Asiana Airlines has recognized the importance of reducing global warming as part of its corporate social responsibility. The company certified as a 5-star airline for four consecutive years from the airline research organization Skytrax, is better known as a pioneer in the industry for introducing ways to lower its carbon footprint. In 1995, Asiana became the first airline to obtain the ISO 14001 (environmental management
system) certification.

It has introduced energy-saving programs for its aircraft, such as aircraft engine washing, flight plan improvements, reduced flight distances and altitudes and conducts weight management. As a result of washing aircraft engines, Asiana's aircrafts improved its fuel efficiency and reduced 3 million tons of CO2 in 2008.

The firm has been implementing Korea's first Carbon Offset Program for its customers. On board the plane, Asiana also serves coffee that comes with the Rainforest Alliance Certified seal of approval. The Rainforest Alliance is an international nonprofit conservation organization that ensures coffee farms have met rigorous standards for the conservation of natural resources and rights and welfare of farm workers and local communities. Recently, Asiana Airlines tested the ``Eco Flight,'' featuring a low-emission airplane from Gimpo to Haneda Airport in Japan. The flight reduces fuel use by 18 percent, uses lightweight food cards and operates at a consistent speed and altitude.

Asiana also launched a ``Green Travel, Green Life'' campaign to educate passengers on how to reduce CO2 emissions in their daily lives and travels. Departing passengers were given leaflets that inform them of the level of CO2 emissions produced in everyday life, as well as tips on how to combat this. Tips include decreasing baggage weight, using public transportation and avoiding leftover food inside the aircraft cabin. For all their efforts, Asiana received the 2009 Korea Green Climate Award last year, in recognition for its green management policies. In 2001, it was designated by the Ministry of Environment as the first environmentally friendly company within the service industry. In 2006, it received an environmental distinction for its maintenance facilities at Incheon International Airport, and in 2008, the 2008 Presidential Award of the National Environmental Management Grand Prix for its energy saving and CO2 reduction activities.
Posted by Green Cleaners Singapore and Australia

Labels: Tips are hidden in the article ;)