An update on the Gulf oil spill

Chemical dispersants is being used to fight the massive oil spill in the Gulf of Mexico, only as long as their environmental benefits outweigh the costs. I wonder what they mean by it. Let's take a look at the cause and effect of this answer of theirs. 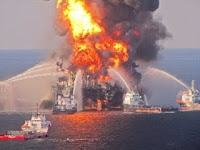 The primary ecological concern associated with dispersants is their ability to enhance the effective toxicity of oil via the dispersion process. Dispersants are able to enhance the distribution and movement of not just oil fractions, but also its more toxic, soluble, and mobile aromatic components, said an information sheet sent to Bellona Web by Richard Charter, a foremost expert on marine biology and oil spills who is a senior policy advisor for Marine Programmes for Defenders of Wildlife and is chairman of the Gulf of the Farallones National Marine Sanctuary Advisory Council. Dispersants transfer oil from the water surface into the water column, and while decreasing exposure to oil for surface dwelling organisms, such as seabirds, marine mammals, and sea turtles, it increases the exposure for the water column’s communities of fish, eggs and larvae as well as shrimp, corals and oysters. Dispersed oil particles tend to remain in the upper layers of the ocean and as they approach inshore areas, increasingly impact corals, oysters and shrimp. Dispersed oil particles tend to assume a less visible, more difficult to cleaned-up quality. They also assume pervasive presence in the environment, with increased opportunities for long-term ecological impacts, particularly in coastal areas. So basically its a "save either one" situation. The dispersants also make skimming oil off the surface of the water difficult as the balls of oil that form when dispersants are applied can clog skimming mechanisms. Due to time differences between Norway and the US Gulf Coast, it was not possible by press time to find out if the dispersants arriving from Norway are of the Corexit family, or if they contain 2-butoxyethanol, or 2-BE. 2-BE is known to cause heath dangers to clean up workers and wildlife alike. Chemical dispersants can concentrate leftover oil toxins in the water, where they can kill fish and migrate great distances. Corexit 9500 is associated with headaches, vomiting and reproductive problems as sides effects at high doses to clean-up workers. 2-BE has also been documented to cause the breakdown of red blood cells, leading to blood in urine and feces, and can damage the kidneys, liver, spleen and bone marrow of humans, effects not included on the information sheet for workers.
Posted by Green Cleaners Singapore and Australia