Australia may be getting a glimpse of its globally warmed future 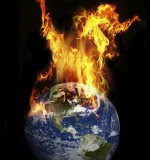 Experts agreed Tuesday that no one drought, flood or wildfire can be attributed to global warming, but they stressed that the eucalyptus forest and farms of southeastern Australia are becoming warmer, drier and more prone to fire as the planet heats up.
Some say rising temperatures are making Australia's climate more extreme at the edges. Snow will disappear from the few mountains that still have it, the cyclones that batter the topical north could get more powerful and the conditions that set the southeast ablaze could become common.
"The terrible events of the past couple of weeks are, without doubt, partly the result of global warming and the greenhouse effect," said Neville Nicholls, an expert on climate change and wildfires at Australia's Monash University.
Global warming cannot be blamed for starting the hundreds of recent fires — tens of thousands of such blazes erupt across Australia every fire season, from October to March — but the effects of climate change exacerbated their ferocity, Nicholls said.
First, a decade of drought has made Australia's wild forests — known as "the bush" — tinder dry. Second, a sustained and record-breaking heat wave settled over the region. Lastly, record-smashing temperatures on Saturday topped 117 degrees Fahrenheit (47 degrees Celsius) and combined with winds up to 60 mph (100 kph) to whip fires into furnace-like intensity.
The Intergovernmental Panel on Climate Change, the Nobel Prize-winning team of scientists responsible for advising the United Nations about global warming, says the rise in the atmosphere's temperature could cause water shortages, crop failures, more deaths from heat waves and more severe storms around the world.
In Australia, it means more droughts in the dry south and more flooding in the tropical north. The Great Barrier Reef, the world's largest coral reef system rich in sealife and sensitive to small temperature changes, is in trouble.
The Australian government's Commonwealth Scientific and Industrial Research Organization concluded in 2007 that the country's average temperature will rise about 1.8 degrees Fahrenheit (1 C) by 2030 and up to 9 degrees F (5 C) by 2070 if greenhouse emissions are not curbed.
An island large enough to be counted as a continent, Australia's climate varies with its landscape. It is home to dry shifting dunes in the desert "red heart," misty Riesling grape-clad hills, and lush monsoonal rain forest and mangrove swamps.
Among the panel's forecasts: Climate change would likely mean less rain, but rainfalls that did occur would be more intense. Drought in the south — the wheat-, sheep- and cattle-growing food belt — would be more frequent and fires more common. Cyclones that are a regular feature of the summer months in the north would hit harder.
Even as southeastern Australia sweltered and the fires raged this week, some 60 percent of northeastern Queensland state was covered by floodwaters after weeks of drenching rain from a dying offshore cyclone. Three thousand homes were damaged. No deaths were reported.
While scientists cautioned against attributing the wildfires themselves to global warming, they said changing conditions from rising temperatures are having an impact.
"Australia — and particularly the southeastern corner of Australia — is fire prone, so a fire-prone environment coupled with a warmer and drier climate in the future is likely to increase the incidence of this kind of event," said Mark Adams, a wildfire expert at the University of Sydney. "But statistically, we won't be able to prove it for many decades."
Adams said Australia's peculiar ecosystems are particularly susceptible to the effects of climate change. An increase of just one or two degrees would cause snow in Australia to disappear, and its Great Barrier Reef and rainforests are particularly sensitive to warming, he said.
"But I don't think that on the whole Australia is more susceptible than many other — or indeed any other — continent," Adams said.
Penny Whetton, leader of the climate change research group at Commonwealth Scientific and Industrial Research Organization, also cautioned against tying the fires too closely to global warming.
"Due to changes in the climate, the high risk of fires has increased and will increase," she said. "But that is different than saying climate change caused these fires. It's difficult to relate climate change to an individual weather event."
For conservationists, the dry conditions and the devastating fires bolster their campaign to push the world's governments to move faster on reducing emissions of greenhouse gases.
"It's a sobering reminder of the need for this nation and the whole world to act and to put at a priority our need to tackle climate change in a way that politicians have simply been unable or refused to do in past decades," said Sen. Bob Brown of the left-leaning Australian Greens party.
Posted by Green Cleaners Singapore and Australia