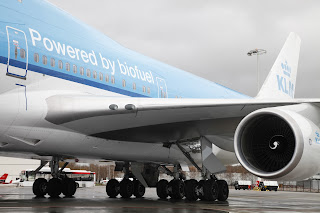 The same oil that fried up your lunch may also be powering your next flight to Europe.
Dutch airline KLM has begun powering some commercial flights on an eco-friendly fuel mix that includes 25% cooking oil and 75% jet fuel. The specially fuelled Boeing 777 flights will be tested on 25 roundtrip transatlantic flights between New York’s JFK and Amsterdam’s Schiphol every Thursday over the next six months.

The leftover waste oil comes from restaurants in Louisiana, where it’s used to fry up cracklins, catfish and other Cajun treats before being refined to fuel the flights. Though some say the fuel smells like fast food, the cooking oil is safe for powering jumbo jets and provides exactly the same flying experience. Even better, it reduces carbon emissions by up to 80%.

KLM has been offering biofuel-powered flights for years, with its first demonstration flight fuelled by a mix of 50% biofuel made from camelina (an oily member of the mustard family) in November 2009.

In the near term, it’s more likely cooking oil will by frying up your French fries and falafels rather than fuelling your flight. That’s because biofuels made from recycled cooking oil are expensive – about $10 per gallon, or roughly three times the price of regular jet fuel – largely due to the costs of refining and preparing the oil for use on jumbo jets.

Most recycled cooking oil today is used to power diesel trucks or mixed with home heating fuel, a simpler conversion process. One innovative company, Grease Lightning, based in New York City, has been purchasing used cooking oil from local restaurants to convert into biodiesel fuel since 2011. And several Boston hotels, including the Saunders Hotel, Lenox Hotel, and Ramada Inn Boston, are using recycled vegetable oil to fuel their laundry trucks and hotel shuttle buses.

Although the sustainability of these alternative biofuels makes it an environmentally friendly option for progressive airlines, widespread adoption of recycled cooking oil requires that usage spreads, making the fuel more affordable for budget-strapped airlines. The air travel community is hoping for financial support from the governments where major airlines are based in the form of subsidies, research grants and tax benefits.

“A lot still has to happen before biofuel will be available on a large scale and for it to be economically competitive in relation to fossil-fuel kerosene,” KLM said in a statement. “We cannot achieve this alone. We absolutely need the commitment and support of all the relevant parties: business, government and society.”

Resourcefulness and creativity of mankind is astonishing; who knows what we will come up with next?