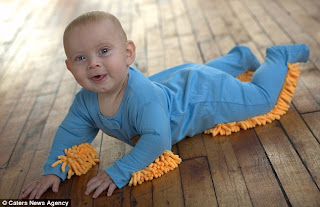 Since it's almost the weekend, we wanted to share this humourous article with everyone to get you through the last few working hours. It's a funny idea that somehow seems to be thriving, and for all they claim it to be efficient, we are merely trying to put a smile on your face with the help of a silly idea and a cute little baby.

An enterprising designer has come up with a unique way to get children involved with the housework: by turning crawling babies into cleaning machines.

The entrepreneur has combined the traditional 'onesie' babygro with specially designed mop heads fixed to the arms and legs which enable babies to polish the floor as they learn to crawl. The $40 (£25) Baby Mop is the brainchild of U.S. website BetterThanPants.com and was inspired by a spoof Japanese advert of a similar invention.

In their blurb for the novelty product the writers on the website joke that the outfit will 'teach your baby a strong work ethic early on in their life while burning off energy, aiding in allowing them to sleep better too.'

Mike Parker from BetterThanPants.com said: 'We have sold about 100 in just one month since adding it to our site. So far all the feedback from customers has been very positive, however we get some negative emails surrounding the idea of the actual product.'

The idea was formed to make the actual product from a Japanese commercial on the web.

'I believe the idea was submitted as part of a contest on ridiculous inventions in Japan but was never actually sold anywhere,' says Parker.'But this is the real deal, it's a legit product and is proving very, very popular.'

Shoppers visiting the site have reacted with good humour, saying they love the product - with one jokingly suggesting wetting the mop to make the baby more efficient.
Posted by Green Cleaners Singapore and Australia