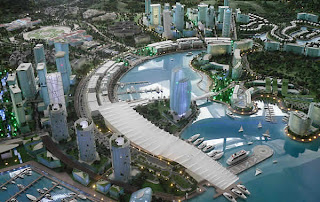 Iskandar Malaysia – opposite Singapore located across the strait of Johor, houses the beginnings of a new project that will shape the future. With a surface area the size of Luxembourg, the site is being developed into what architects hope will be a mega city built along eco-friendly lines, using green energy to put to an end the pollution afflicting many Asian cities today.

With an expected population of 3 million by the year 2025, this booming city aims to provide energy from renewable sources, providing public transport and diverting waste to be made purposeful once more. The Malaysian government aspires to showcase this to be copied on a bigger scale across the region.

The world's urban population overtook the number of rural-dwellers for the first time in 2007, and future population growth in south-east Asia – at least 9bn people are expected to inhabit this planet by 2050, up from 7bn at present – is expected to be mainly in cities in the developing world. By far the greatest growth will be in slums, by current estimates.

Iskandar Malaysia offers an alternative. The plans are for a city that not only incorporates the latest in environmentally friendly technology, but that is designed for social integration. Green spaces and areas where people can mingle and relax will improve people's mental wellbeing and encourage social cohesion, it is hoped. Skyscrapers will be mixed with low-rise buildings and more homely, intimate neighbourhoods.

Najib Razak, prime minister of Malaysia, said in a speech: "Iskandar Malaysia [is] a smart city template – protecting the environment, promoting equitable development and addressing urban development challenges [through] the creation of smart, liveable urban communities that will yield an improved quality of life for thousands of citizens, with safer, cleaner, healthier, more affordable and more vibrant neighbourhoods, serviced by more efficient and accessible transportation systems – great destinations for businesses."

Ellis Rubinstein, president of the New York Academy of Sciences, which is working on the "edu-city" university campus area, said it could be "a model to countries needing to accommodate the social and economic needs of fast-rising populations and environmental challenges".

However, the project's developers will have to overcome significant obstacles. New eco-cities have been planned in the past, from China to the US, most of which have floundered. China's Dongtan was heralded the world's first planned eco-city, but plans have been mired in difficulty for years; a UK project for "eco-towns" was widely ridiculed and has been all but abandoned.

So far, the Malaysian government has managed to attract support from Pinewood Studios, which will build new facilities in Iskandar, and Legoland which will build its first Asian theme park in the city. Several UK universities – including Newcastle and Southampton – are also planning to open up remote campuses. More than $30bn has been promised for the city, of which more than a third will come from outside Malaysia.
Posted by Green Cleaners Singapore and Australia