You have got to be kidding me!!! Fabricated air pollution reports in a highly developed and alledgedly environmentally concious country, Australia. What's next??? 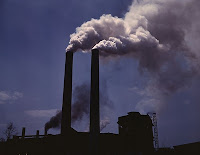 A former employee of an Australian air testing company alleges data is being fabricated and fraudulently provided to regulatory bodies and is going unchecked by the government. The former employee - who has now left the industry - alleges that shortcuts were habitually taken when testing for air pollution from smoke stacks during his three-year tenure with the company.

"While I was there, there wasn't any formal training. You were thrown in the deep end and the equipment was a piecemeal piece of equipment to do what was required, but not to do anything properly.

"I even saw on numerous times my superiors turning up on site with me to do the work and then saying that they couldn't be bothered doing the sampling.
"I've also seen them, for dioxins and furans, which were very expensive tests that had to be done, instead of doing the six-hour sample I've seen them pretend to have taken samples onto filter papers."

The scientist says he and colleagues were pressured to cut corners.
"Being hurried off site, not being given enough time. If it would take a whole week to get a job completed, you would get it completed in two days because you're required elsewhere. So you were sent off somewhere else and the figures were made up so that you could get two large jobs done in a week instead of just the one."
The man says he has obtained copies of reports that support his claims since leaving the company.

And he says he believes the fraudulent behaviour is going undetected and could be widespread within the industry.

He alleges the National Association of Testing Authorities (NATA) and the Department of Environment and Resource Management are not sufficiently regulating compliance to standards.

"The Environmental Protection Agency is requesting that industry provide them with reports by NATA-accredited bodies that detail the levels of air emissions that they have," he said.

"But when these reports are submitted they are taken at face value and they're not being properly scrutinised by either NATA or the EPA. So there is nothing to show that these are being done properly, and I have evidence to show that they haven't been done properly if they were to be checked."

He says the effects of non-compliance could be detrimental for the public. "If we don't have accurate figures on what is being emitted into the air, in Gladstone for example, we have no way of knowing if levels are being exceeded past safe community levels - and the air could have high levels of lead, high levels of dioxins, of carcinogens, or poisons into the atmosphere which could then cause sickness."

The scientist also says that due to non-compliance going unchecked, councils make uninformed decisions about industry expansions. And he says similar discrepancies in air testing could be occurring in the coal seam gas industry.

"If they got the incorrect information about the amount of pollutants that are being put into the atmosphere, they are unable to accurately determine whether to go ahead with expansions, because they don't have a correct baseline to know what the air pollution levels are at any one time."

He says during his time at the company he saw large companies go from struggling to pass compliance tests, to easily passing environmental standards.
"NATA needs to start doing their job properly," he said.

"Unfortunately they're not an independent body because they are paid for by the stack testing companies themselves ... so there is no independence there. "But ideally we should look more towards the American model, where the environmental protection agency have their own sampling officers who are fully experienced in stack testing and actually will perform surprise visits to stack testing companies when they're on site, are able to audit reports, and have a requirement that raw data is included in the stack testing reports so that anyone can have a look and ensure that things are being done to the standard.

"At the moment there are no requirements that you include your raw data in Australia. And every testing company should have that data. It should be no problem for them to include it in any report that they submit, to show that things were done to the standard."
Posted by Green Cleaners Singapore and Australia