While China uses Western medicines, it also still relies on the traditional medicines from complex recipes of plant and animal parts that date back some 3,000 years. Though the use of some animals, including tigers and rhinoceroses, is already illegal in China, demand remains strong and an underground market fed by smuggling continues to flourish. 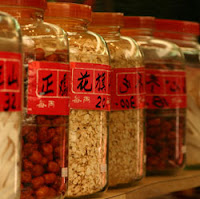 As late as this week it was made public that customs officers in Guangdong, China, have seized more than 7.8 tonnes of frozen pangolins and 1,800 kg of pangolin scales from a fishing vessel after it was stopped for inspection at Zhuhai's Gaolan Island. Two of the four species are classified as Endangered by IUCN. (For the full article please go to: http://www.traffic.org/home/2010/7/13/huge-pangolin-seizure-in-china.html )

Traditional doctors in China have been substituting tiger and rhino parts for a long time because they have become so rare. One example: Bones of the sailong, a north China rat used in Tibetan medicine, are certified in China as a substitute for "Tiger Bone Wine," a famous tonic. It is said that any professional in the field of oriental herbal medicine would recognize that for every substance supplied by endangered species there are many effective substitutes.

Please promise me that next you buy your traditional Chinese medicine that you will check that it doesn't contain any ingredients from endangered species and help make a difference!!
Posted by Green Cleaners Singapore and Australia