From Workout to Watts! 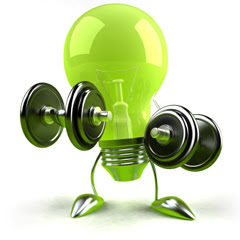 If you're the type of person who thinks working out is just a waste of energy, then a new gym developed in the UK might help change your mind.

This new fitness center, situated in a city park in Hull, northeast England, not only provides a facility for local residents to get fit but also generates electricity every time the equipment is used.

"The goal is that a gym like this should serve a community of about 5,000 people and really people could easily make a kilowatt hour per day. So, if you times that by the amount of gyms that we could possibly install, that actually becomes quite a significant amount of energy," Delaney said.

The company has already installed more than 350 gyms in public places around the UK -- paid for by local councils and free of charge to use for local residents -- but this is their first to convert human energy into electricity.

The gym currently powers its own lighting, but the hope is that one day they will be feeding surplus energy into the national grid and reducing electricity bills.

"We truly believe that in the western world we consume too much energy both in terms of food and electricity. What we're trying to do with the green energy gyms is give councils and communities a tool, with a facility like this, so people can actually offset their consumption of both food and electricity," Delaney says.

The concept clearly impressed city officials in Hull. "The aim of the council is to get more and more people active instead of sitting in their lounges watching television," says councilor Terry Geraghty. "We want to get people off their [sofas] and get a bit active ... more and more people are getting obese, also diabetes, heart disease, not just in Hull, but in the country," he added.

The idea is also attracting interest from local authorities around the world, some of them in developing countries, says the company. The prototype in Hull cost around $100,000 to install, but there are also plans to develop a cheaper $32,000 model which would charge mobile phones and a larger gym (around $130,000) where power could be fed back to the grid.

Li ng Ge, a research scientist at the UK's Imperial College London, is impressed with the scheme but its price may be an issue for poorer nations. "The conversion from the gym to the national grid could be quite costly in developing countries," Ling says. Instead of installing electricity-generating gyms in countries in Africa, for example, it might be cheaper to use alternatives such as solar heating, solar power cells or hydroelectric power stations, she says. "But still, it's a really beautiful concept and it uses existing technology in a novel way," Ling said.

"I think it's an excellent way to educate people about the concept of sustainability and changing people's behavior without putting the 's' word in your face."