Why Cool It, a Film about the Self-Proclaimed "Skeptical Environmentalist," Is a Must-See

The new movie featuring the economist Bjorn Lomborg, who has been a thorn in the side of climate change activists since his book, The Skeptical Environmentalist," is provocative – and not just for the sake of being provocative. 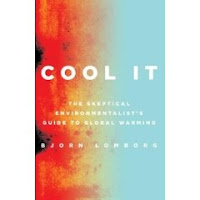 On November 12, the cinemas will start screening Cool It!, a documentary about Lomborg and his contrarian ideas about climate change. Odds are that the runaway train will put more butts in the seats than musings about runaway climate change. No matter. "Cool It!" is not a bad film in an "Inconvenient Truth" sort of way. Like "Inconvenient Truth," "Cool It!" tries to humanize its protagonist by taking a look at his early years - Lomborg laughingly recalling how he angered his stepfather when he dug up the family garden for an experiment, sort of like Gore in his movie sheepishly recalling the time he crashed the family car.

The film could have been an ego trip, and at times, it meanders close to the edge of that cliff, but pulls back sufficiently to focus on what we need to know about Lomborg's ideas and on the work of experts exploring alternative energy technologies, climate change adaptation, and geo-engineering.

Lomborg has long been a bete noire of the green movement, likely because he accepts the reality of human-caused climate change but rejects conventional thinking about fixing the problem. There's nothing that sets off a tribe more than a member of the tribe who likes to pick fights with the family, like the roguish cousin who stirs the pot around the turkey every Thanksgiving.

Unlike a James Inhofe or a Rush Limbaugh, outsiders who are easy to dismiss because of their buffoonish tirades about climate change hoaxes and scientists plotting world domination, Lomborg is not so easily brushed off. Unlike Inhofe and Limbaugh, he has actually thought about this stuff in depth. Too often, he says, the climate change debate has devolved into shouting between two extremes - one proclaiming imminent apocalypse, the other painting sugar-plum fantasies of a greening earth. Better to chart a middle way.

Not that Lomborg's ideas don't have holes in them. They do, but any plan for cracking a nut as rock-hard as climate change will have holes in it. More about that in a bit.

The chronically casual Lomborg - has he ever worn a long-sleeved shirt in his life? - was on hand at a private screening in Seattle last week. During the post-screening Q&A, Lomborg answered questions matter-of-factly in streams-of-consciousness that layered on details and minimized spin and self-referential bloviation. He graciously acknowledged some pointed criticism that the film went overboard in making an argument that individual steps taken now - changing out inefficient lighting, for example - are of little consequence in the broad scheme of things.

So what are the particulars of Bjorn's argument? He asserts that climate activists have wasted time scaring people about climate change. Public campaigns like Earth Hour - everyone turn off your lights for one hour - are feel-good exercises that amount to a whole lotta nothin'. Politicians' promises to cut emissions significantly have come to little. Even if they had, they would have cost too much and yielded too little.

Lomborg says a better approach would be pouring money into R&D to drive down the costs of solar energy, ocean wave power, 4th generation nukes, and biofuels produced from non-edible feedstocks, so that they can compete with oil and coal. Spend money on the unavoidable need to adapt to climate change already in the pipeline - better sea walls, for example. And - many greens hate this - put some dollars into R&D for geo-engineering, just in case climate change takes off at frightening speeds, sort of like Denzel Washington's freight train.

The annual budget for his work program - $250 billion. Spend $100 billion on energy R&D and another $50 billion on adaptation. Spend another $99 billion on development basics for poor countries - clean water, education, and health care - human needs that are immediate and acute. The remaining $1 billion from the kitty would be earmarked for geo-engineering research.

Where to get the money? Charge a carbon tax of $7 per metric ton. Where to get the political will to carry out the plan? That's the question that Lomborg hasn't answered effectively. He makes a moral case for his proposal, which is well and good, but moral cases often don't get money appropriated for big projects in the absence of a compelling driver that is immediately obvious to one and all, even to knuckleheads like Sarah Palin.

For example: Lincoln got the Transcontinental Railroad built as a way to bind up a country in mortal danger of flying apart. FDR spared no expense on the Manhattan Project because the specter of Hitler's Luftwaffe armed with nukes was terrifying. We went to the moon because we feared that a chortling Khrushchev would use space as a platform to flick hydrogen bombs onto the USA anytime he fancied.

Many believe that climate change is just that sort of driver. Many, however, do not. We must change that and/or identify other drivers. And, Lomborg's argument that R&D alone will push cleaner energy sources into the market, in the absence of market signals that tell the truth about carbon pollution costs, is not entirely convincing.
Still, Lomborg has raised some provocative ideas that have added spice to a global debate that has been stuck in neutral since the Copenhagen belly flop last year. He's worth listening to.

Greens should go see "Cool It!" next month. They might find that the skeptical environmentalist doesn't have horns and a tail after all.
Posted by Green Cleaners Singapore and Australia