Some species of monkeys and apes are in danger of being wiped out by global warming, say scientists. A new study suggests that many of the animals will not survive if temperatures around the world rise by just 2C.

Those that cannot adapt could be driven to extinction, experts warn. The species most at risk are the already endangered gorillas and colobine monkeys, say the British researchers. 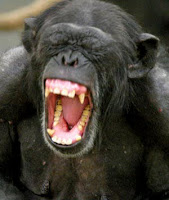 The study, published online in the journal Animal Behaviour, pinpoints which primates are are most threatened by climate change. Old World populations in Africa will be hardest hit, especially species such as colobines whose diets are mainly leaf-based, the scientists predict.

New World monkeys in South America are much less likely to be affected by a rise of 2C in average global temperature. However, they would not be spared if temperatures rose by 4C, causing their habitats to become fragmented.

The researchers coupled climate models with an analysis of behaviour, diet and group size of different primate species across the world. African monkeys and apes with leafy diets are vulnerable because their habitats are so restricted, being confined to a narrow region of the equator. Fruit-eating species such as the baboons and guenon monkeys of Africa typically have a much wider latitudinal range and could cope with more variable climatic conditions.
Posted by Green Cleaners Singapore and Australia