Ever wonder how much music artists pollute the Earth while on tour? Today, many musicians are conscientious about the environment, putting shows on both for fans and to raise awareness. Traveling in eco-friendly buses, encouraging fans to recycle and providing education about global warming are just some of the ways musicians contribute to the environmental movement. Listed below are just five out of the quickly emerging artists that have sung their way onto the green bandwagon. 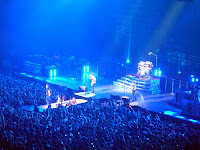 1. O.A.R.
Of A Revolution, or better known as O.A.R., can be heard all around the nation rocking out and entertaining their fans. Currently, they are touring across the country in their Green Dream tour bus raising awareness about recycling. At each show, the band promotes the importance recycling and how it can have a huge environmental impact. If you’re going to be at one of their upcoming shows, be sure to stop at the recycling centers set up throughout the venue where you can learn how to reduce your carbon footprint. This is not new for O.A.R., as they also promoted the environment during their 2008 “Campus Consciousness Tour.”

2. Maroon 5
The acclaimed band, Maroon 5, isn’t just five guys who make girls go crazy all around the world for their music and looks. This talented band shows the same passion for the environment as they do for their music. They use biodiesel fuel in their tour buses, which reduces their carbon footprint, and also teams up with Vote Solar, a non-profit movement promoting solar energy. In 2006, the band was honored at the Environmental Media Awards for their commitment to the environment. To see how much Maroon 5 truly loves the environment, check out this video to see how they remained green during their 2008 tour.

3. Sheryl Crow
A true environmental activist, Crow teamed up with Laurie David in 2007 for the “Stop Global Warming” College Tour. Traveling across the country, Crow entertained and educated students about global warming. She encouraged them to become active and help the environment for themselves, their communities and the country. While on tour, she uses biodiesel fuel for every tour bus and promotes a green lifestyle. She was also one of the keynote speakers at last year’s GreenBuild Conference & Expo, a conference dedicated to transforming the way buildings and communities are designed, built and operated to create an environmentally and socially responsible, healthy and prosperous environment.

4. Willie Nelson
A longtime environmental activist, Nelson promotes the use of biodiesel fuel and keeping the Earth clean. Nelson is also an honorary board member of the Sustainable Biodiesel Alliance, co-founded by his wife, and that was created to address issues about the U.S. biodiesel industry and its sustainability. In addition, he is a huge supporter of using hemp in fuel and clothing. In the mid-80s, he organized the benefit concert series, Farm Aid, which promoted the environmental benefits of organic and locally grown food and helped family farmers keep their land.

5. The Roots
The Grammy Award Winning hip-hop band, The Roots, may be known for their nightly appearances on “Late Night with Jimmy Fallon,” but did you know they are green activists and animal lovers? The band worked with PETA on the campaign, “Stop the Violence: Go Veg,” combating violence against your body and promoting veganism. They even hosted a Pre-Grammy party in 2007 to raise awareness about green issues. That same year, they launched the “Feed Your Roots” campaign, which educated people on the benefits of composting programs and that helped integrate them into schools nationwide. Continuing their eco-friendliness, they use biodiesel fueled buses while touring across the country.

Many artists, including the ones above, also partner up with the Green Music Group and Reverb to make sure their eco-friendly voices are heard.
Posted by Green Cleaners Singapore and Australia