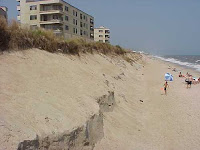 A rise of at least two meters in the world's sea levels is now almost unstoppable, experts told a climate conference at Oxford University yesterday.

"The crux of the sea level issue is that it starts very slowly but once it gets going it is practically unstoppable," said Stefan Rahmstorf, a scientist at Germany's Potsdam Institute and a widely recognized sea level expert. There is no way I can see to stop this rise, even if we have gone to zero emissions."

Rahmstorf said the best outcome was that after temperatures stabilized, sea levels would only rise at a steady rate "for centuries to come," and not accelerate. Most scientists expect at least 2 degrees Celsius warming as a result of man-made greenhouse gas emissions, and probably more. The world warmed 0.7-0.8 degrees last century.

Rahmstorf estimated that if the world limited warming to 1.5 degrees then it would still see two meters sea level rise over centuries, which would see some island nations disappear. His best guess was a one meter rise this century, assuming three degrees warming, and up to five meters over the next 300 years.

"There is nothing we can do to stop this unless we manage to cool the planet. That would require extracting the carbon dioxide from the atmosphere. There is no way of doing this on the sufficient scale known today," he said. Scientists say that ice melt acquires a momentum of its own - for example warming the air as less ice reflects less heat, warming the local area. "Once the ice is on the move, it's like a tipping point which reinforces itself," said Wageningen University's Pier Vellinga, citing various research.

"Even if you reduce all the emissions in the world once this has started it may be unstoppable. I conclude that beyond 2 degrees global average temperature rise the probability of the Greenland ice sheet disintegrating is 50 percent or more. (That) will result in about 7 meters sea level rise, and the time frame is about 300-1,000 years."

Delegates from about 190 nations are meeting in Bangkok to try to speed up U.N.-led negotiations to replace the Kyoto Protocol with a tougher climate pact. Speakers in Oxford used history to back up their arguments on rising seas. Three million years ago the planet was 2-3 degrees warmer and the sea 25-35 meters higher, and 122,000 years ago 2 degrees warmer and 10 meters higher, they said.

"What we now see in Greenland, Antarctica could be a temporary phenomena but it could also be the start of what we saw 122,000 years ago," said Vellinga.

Sea levels have risen about 20 centimeters in the past century and that effect was accelerating, speakers said. That rise was adding to storms such as that in the Philippines, although that single event couldn't be attributed to climate change, said Rahmstorf. "Of course the flooding from a given storm event would be less severe if we hadn't added those extra centimeters."

About 40 million people worldwide live in flood plains, said Southampton University's Robert Nicholls. That is 0.6 percent of the global population and 5 percent of global wealth, because of valuable assets such as airports and power plants. He was confident that coastal protection could hugely reduce lost land and assets. The cost of that speakers put at anywhere from 50 billion euros ($72.85 billion) a year by 2020 to up to $215 billion a year by 2100.
Posted by Green Cleaners Singapore and Australia